I didn’t fall in love with Seville, but I also kind of did.

I mean, when I first arrived, Seville didn’t live up to the hype, and I kind of hated the cramped touristy city center, Barrio de Santa Cruz. But once I explored a bit more and got some churros in me, I felt differently.

You know those cities that you love so much that you imagine going back over and over again, or even renting an apartment and staying awhile? I didn’t feel that way about Seville. But I loved a lot of individual things about the city, which all smushed together add up to an awesome week in Seville.

I’ve even forgotten that I was really sick while I was there (why do I get sick every time I go to Spain?! Why do you hate me, immune system?!) I had a horrible cough and I completely lost my voice and had to communicate with croaking, flailing, and rubbery facial expressions.

So basically, what I’m saying is that Seville is a really great place to visit and I’m glad I did, even though my vocal cords were so swollen I couldn’t phonate.

I do think that Seville can be a little overwhelming. It’s definitely walkable, but it’s somewhat spread out, and you have to do a little research to beat the crowds to the good spots and avoid tourist traps, of which there are many. That said, some of my favorite areas we discovered just by wandering (an essential part of any trip!)

It’s easy to get in to the city from the airport – there’s a bus (EA) that runs several times an hour, and it only costs 4 euros (that’s 10 euros cheaper than the Rhône Express airport shuttle in Lyon!)

We stayed at Urban Sevilla which was nice, with clean double rooms, beautiful tiles, and a rooftop terrace, (we found it on Airbnb, but it wasn’t one). Next time I might have chosen somewhere further from Barrio Santa Cruz. I wish I had known about the Nomad Hostel from HostelGeeks‘ 5 star hostel list – it looks pretty cool!

I tried the cafe across the street upon the host’s recommendation and found it overpriced and sucky. (1,60€ for a stale nutella croissant? Um, no.) But soon we started having breakfast at Bar El Comercio and it was so much fun sitting at the counter of the busy, narrow bar, eating fresh jamón serrano breakfast sandwiches with olive oil, fresh-squeezed orange juice, and coffee in those cute cups. We might have had some churros too. (And chocolate to dip them in, obvi.) 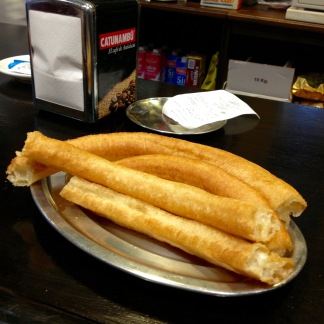 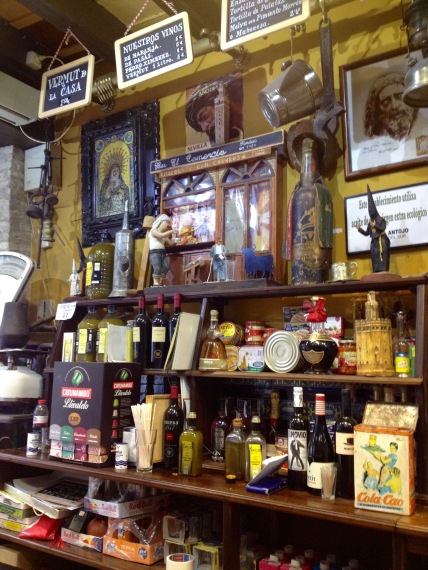 The other spot that felt So Spanish to me was the tapas bar Bodega Santa Cruz – it was crowded and loud, and we ate standing up at the counter. The tapas were fried and delicious, and they tallied up our orders in chalk on the bar in front of us as we ordered. I was worried it might suck because it’s a stone’s throw from the Giralda tower, but I loved it! (Am I an expert in Sevillian tapas? No. Do I like cheap delicious food? Yes.)

I mentioned in my first Seville post that the weather was hit and miss – some sun, some storms. I remember getting freshly-fried churros at the stand on the east side of the Puente de Isabel II that leads over the river to the Triana neighborhood, and dipping them in chocolate while running through the rain because  we couldn’t wait to eat them!

I loved wandering around the Triana neighborhood. The tiles that Seville is famous for come from this neighborhood, so the houses have gorgeous tiling on the outside and in the entryhalls. There’s actually a museum about the history of the industry – Centro Ceramica Triana (left). There are shops with loads of pretty dishes and decorations made in Triana – great affordable gifts and souvenirs. 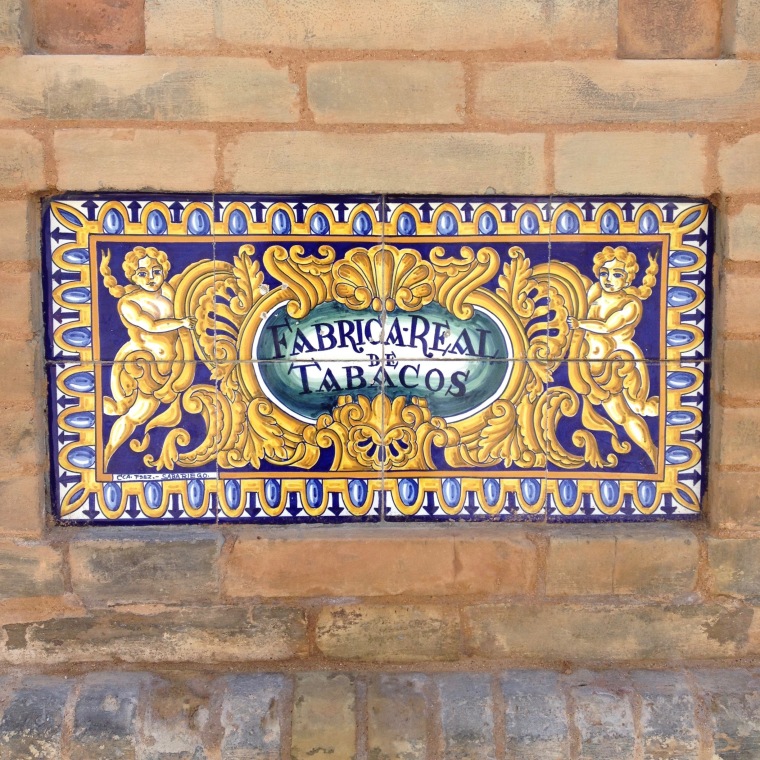 One afternoon in Triana we got caught in a crazy rainstorm in and took refuge at a trendy tapas bar, La Bola (which the internet tells me is now closed, sad!) We sat at a table outside on the covered terrace and ate and drank until the storm passed. I don’t know if tinto de verano is considered a cool thing to drink in Spain or not, but I think it’s so refreshing. It’s basically red wine and soda or lemonade. I didn’t really care for the sangria we tried in Seville – too many spices (yes, I know that sangria comes from the south of Spain and the fruity stuff I like probably isn’t “authentic.” I like what I like.)

Speaking of “authentic” Spanish stuff, we heard that La Carboneria was a great place to see a flamenco performance. People crowded in to get seats near the stage. I loved the dancing, hated the singing! (Is it a requirement of flamenco music that the singer’s vibrato be unbearably wide and uneven, or was it just this guy?)

Most terrifying moment of the evening: I spotted something too large to be a spider, too small to be a mouse crawling on the benches in the corner. Unfazed, my New Yorker companion informed me that it was cockroach. “Haven’t you ever seen one before?” No! The only place I want to see a cockroach is in Wall-E.

At la Carboneria, we met some French guys who were studying flamenco guitar in Seville. They tried to jam a little after the performance was over, but they were relegated to the side room, where Mr. Big Wig Flamenco warbler with vibrato like a truck, who seemed to run the place, started his own performance to drown out theirs. He was like a rooster puffing up to demonstrate male dominance, only louder. (Eye roll.)

As for the sights, we skipped the Giralda tower and bull fighting (no regrets there) but landmarks we did visit were spectacular.

I walked to the colorfully tiled Plaza de España on my first afternoon, and it was really dazzling. It’s free (my favorite!) and really a sight to behold. Tiles depict different regions of Spain, and you can climb up to the second level balcony to view the Plaza from above. 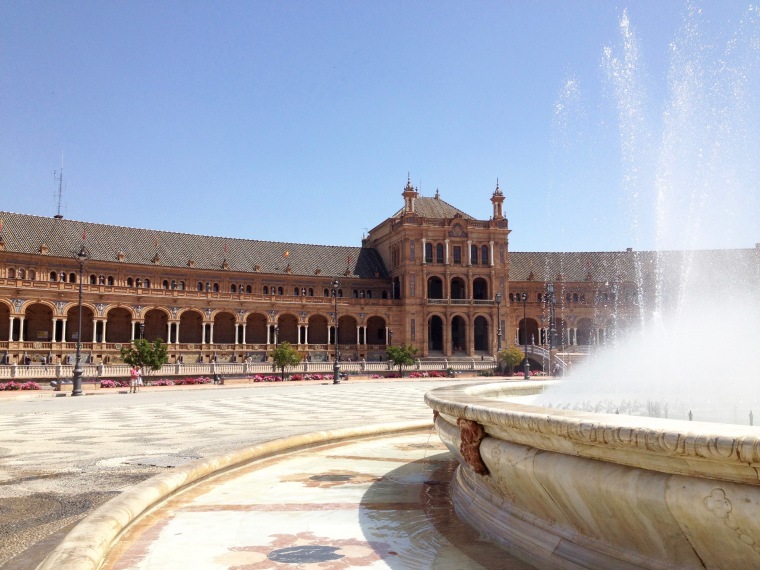 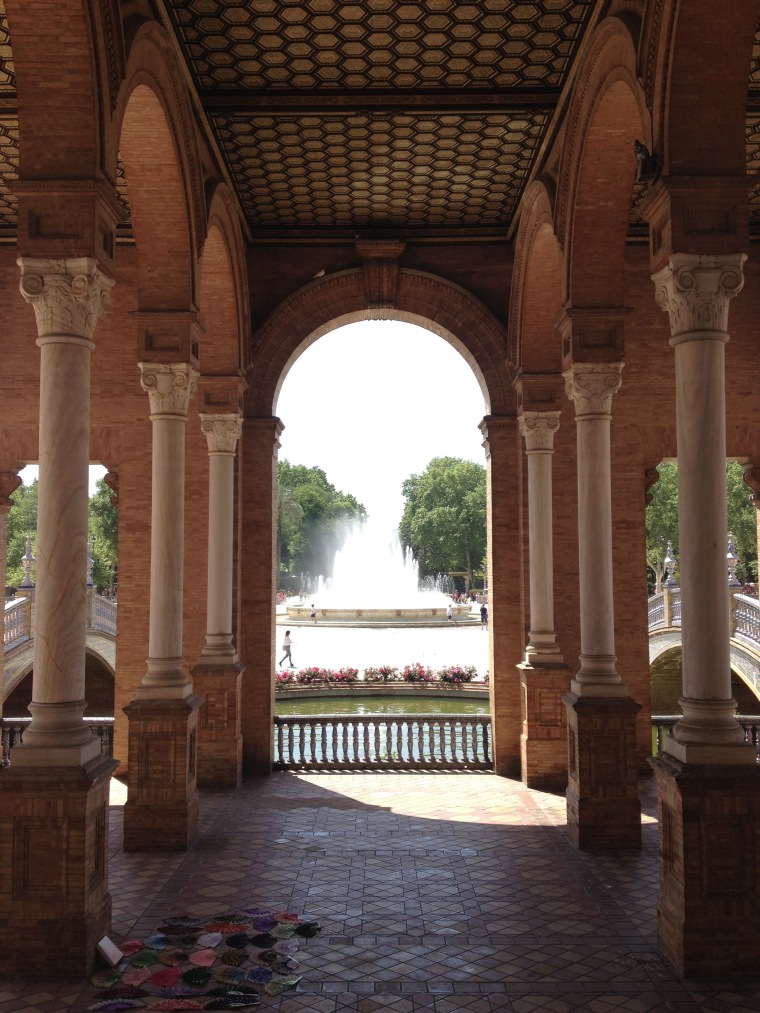 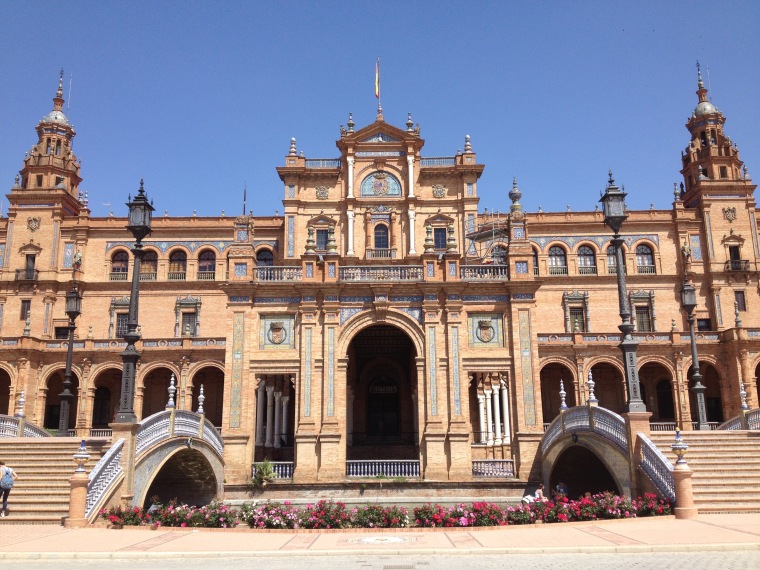 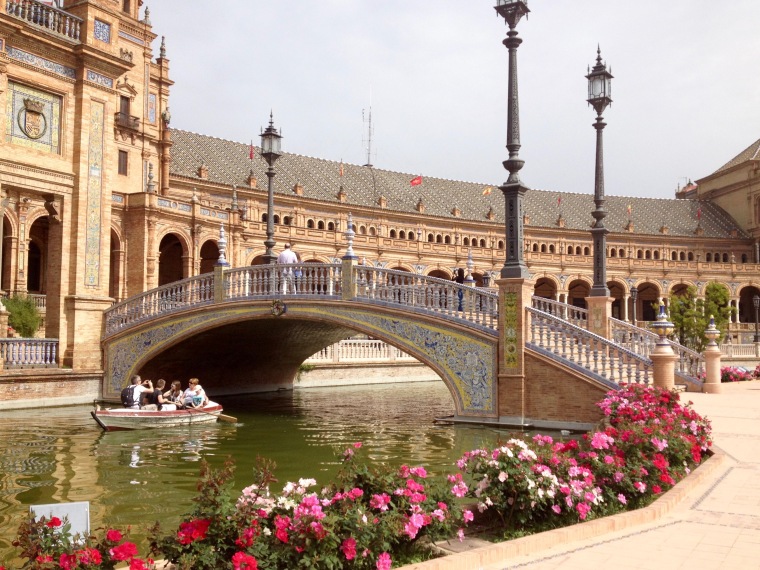 Across the street is the lush green Parque de Maria Luisa, which I enjoyed strolling through to get a little shade. There are orange trees just chilling. NBD.

Alcazar is not as famous as the Alhambra in Grenada, but for me it was absolutely worth the entrance fee and the wait in line. 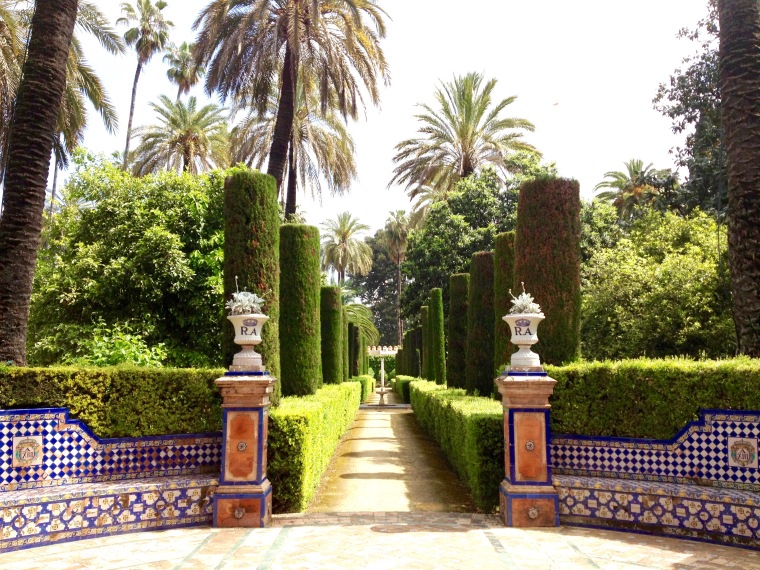 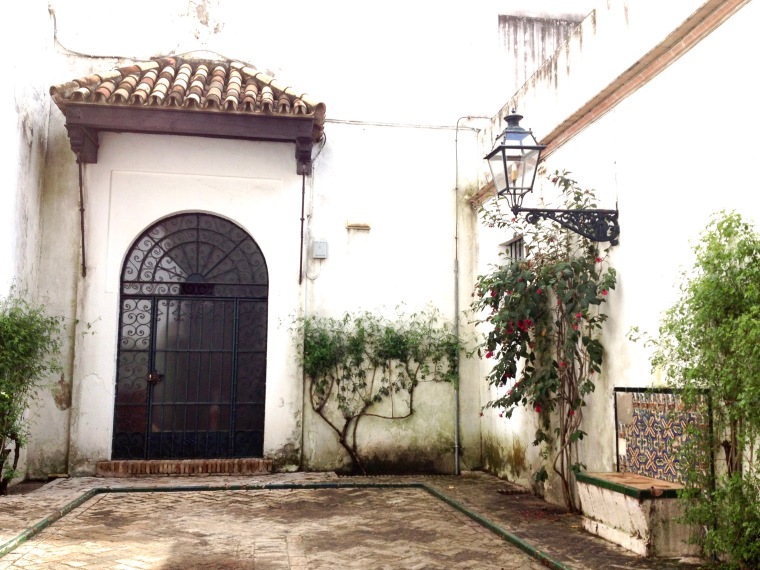 I don’t know if Metropol Parasol is a Seville must-see, but it has a beautiful view of the city with signs designating prominent towers in the skyline, and it’s only a few euros. I felt a little like I was on a futuristic space craft. Or… something. 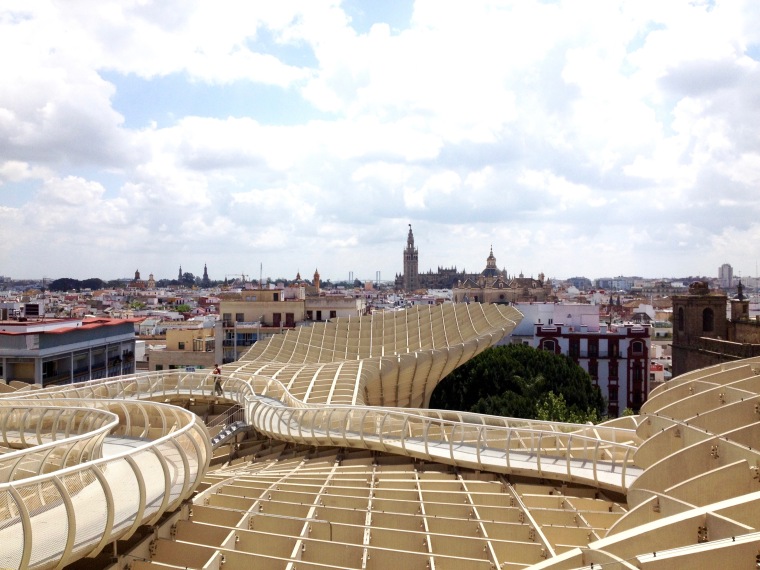 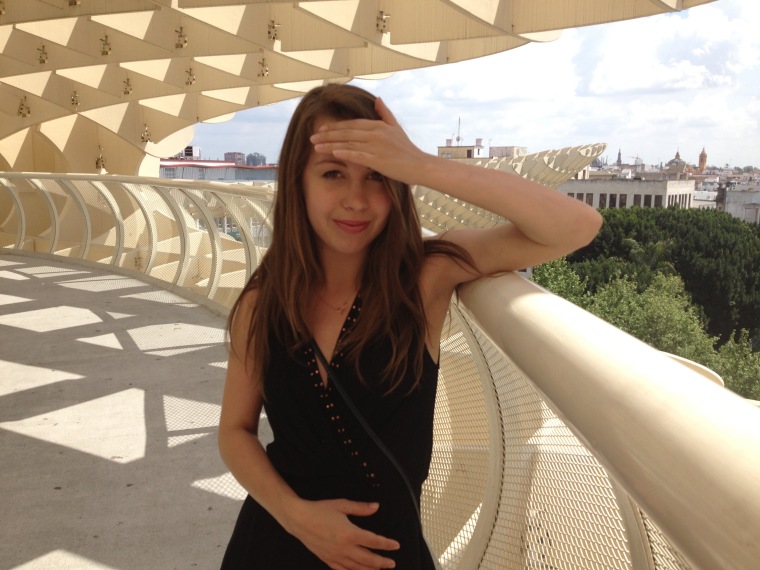 Calle Regina, a little street behind metropol Parasol, was my favorite random discovery. It was lined with cute cafes and boutiques and 1€ cookies, still warm. Honestly, just strolling down this street is one of my best memories from Seville. 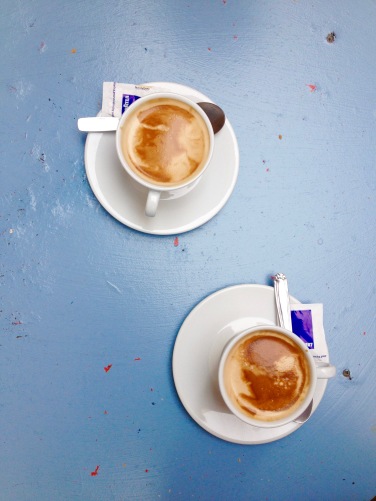 If you’re planning on visiting Seville, local girl Cat of Sunshine and Siestas shares ideas for maximizing your time in Seville and getting off the beaten path, and EuroCheapo has tips for visiting Seville on a budget. I also pin travel articles like crazy, so you can usually find a lot of articles for anywhere I’ve been or am planning to go on my travel board. I even have a board just for Spain:

More about traveling in Spain…

P.S. Check out my Postcard from Seville.