It is no secret that I like French bread (and croissants and pains aux raisins and éclairs and… well, you get the idea). When people ask what brought me to France, I tell them it was the boulangeries. Whenever I am mad at France because the Sécu refused my carte vitale application for reasons they made up, I go get myself the best pain aux raisins I can find. (Something I didn’t know before I moved to Paris: All the flaky pastries like croissants and pain aux raisins are called viennoiseries in French.)

I can’t believe I’ve been in Lyon for three years! I’ve lived up in the Croix-Rousse neighborhood and down on Presqu’île, so those are the areas I know the best, but I try to make it a point to eat croissants all over the city.

Pain d’Hippolyte   My daily go-to boulangerie. Simple, affordable, good bread. It doesn’t look like anything special but it’s the neighborhood boulangerie I keep coming back to. Go for a boule of their maison specialty, a little pain salé with cheese or chorizo, or a good old baguette.  (15 rue Hippolyte Flandrin. Closed Monday)

[Note: It looks like Le Pain d’Hippolyte has closed, but there is a new boulangerie in the same spot. If you try it, let me know how it is!]

Boulangerie de la Martinique   This boulangerie is probably the most popular in the neighborhood – they always have a line out the door. I don’t find them friendly, and I think their bread is a little overpriced, but what they do really well is dessert. They have heavenly Paris Brest and Tarte au citron, and a window full of goodies that you won’t find in most other boulangeries, at a fair price. (24 rue Martinière.
Closed Saturday and Sunday.)

Alain Prost Boulangerie    This boulangerie is bright red, just off the charming Place Sathonay, and was the second-closest boulangerie to my old apartment (after the organic boulangerie with its tiny baguettes). We used to call it the “Boulangerie Bite” because they sold zizi-shaped cookies (with pink icing! (Note: zizi and bite both mean penis in French. The latter is more vulgar than the former.) They are on the list just for that, although their house specialty boules of grain bread are pretty good. (29 Rue Bouteille. See store for hours.)

Le Pain des Jacobins   What really won me over here is the tiny hedgehogs in their lovely window display. They have loads of choice, and there’s always a line. Right between the Marché Saint Antoine (Quai Saint Antoine) and the beautiful Place des Jacobins. (3 rue de l’Ancienne Préfecture. Closed Monday.)

Le Fournil de l’Artisan   This is my go-to stop when I am at Part-Dieu train station (or the préfecture). For awhile they had a swarm of bees squatting in the front case, which I found very strange (even stranger – nobody acknowledged or explained the obvious hive situation!) but the bees took their leave some time ago. I’m fan of their viennoiseries and their baguettes, and it’s a good place to grab a sandwich before your train. (185 Cours Lafayette. See store for hours.)

L’Atelier du boulanger   I actually never went here when I lived up on the Croix-Rousse plateau, and oh boy do I have regrets about that! This is a boulangerie I will hike up the hill for. Everything they make is delicious. They have a handy payment machine where you just put in your coins or bills and it spits out the correct change. On weekends, the line is out the door, and they will run out of things if you sleep in too late! (159 Boulevard de la Croix Rousse. Open daily, closes early Sunday.)

O Fournil des Artists   This was our neighborhood boulangerie when we lived in Croix-Rousse. Unlike many boulangeries, they do strictly the boulanger part and don’t have a patisserie section (Most of the others on this list are actually boulangeries – patisseries because they sell cream filled goodies like éclairs and tartes). The boulanger is young, red-headed, and very, very nice, and his viennoiseries and baguettes are superb.  (12 Rue du Mail. Closed Sunday and Monday.)

Sebastian Bouillet   You’ve heard of Ladurée? Sebastian Bouillet is also a classy joint with macarons and beautiful desserts. I’m not always a big macaron fan but one year Hugo gave me a box of their macarons for Valentine’s Day and they were exquisitely flavorful, delicately crispy on the outside and gooey on the inside. It probably doesn’t belong on this list, but they opened up a little goûter (snack) shop next door to the patisserie where they sell croissants and madeleines and the like, so we’ll say that it counts. (15 Place de la Croix Rousse. Open daily. See website for hours and additional locations www.chocolatier-bouillet.com)

I don’t have a favorite boulangerie in Vieux Lyon! (Not all of the 5th is Vieux Lyon, but after the sliver of Vieux Lyon it extends out into a suburban area where the metro doen’t run.) I lived in Vieux Lyon on Rue Juiverie when I first moved to Lyon, and my boulangerie was Chez Jules, which is a chain that I’ll take over Paul any day, but I am not excited enough about it to officially include it here. You might try the Boulangerie du Palais (8 Rue du Palais de Justice), which always has a tempting window display of pralines. If you have a favorite boulangerie in this area, let me know and I’ll try it! 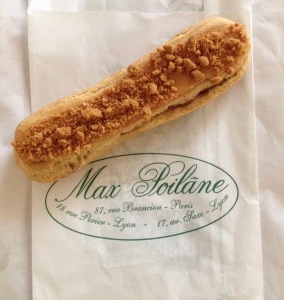 Max Poilane   Hugo and I discovered Max Poilane by chance. We were killing time before meeting his brother in the area, and I felt some hangriness coming on, so we walked further into the 6th (a posh neighborhood whose most interesting feature is Parc de la Tête d’Or) to find a snack. Max Poilane is the first boulangerie we stumbled on, and it was a good thing, because they have the bigget and best pain au chocolat I have ever had. (And after four years, I have eaten a lot of pain au chocolat). Other things Max Poilane does well: petit pain salé (savory bread with things like cheese and red onion), speculoos éclairs, customer service. Absolutely worth crossing the Rhône for! (17 Maréchal Avenue de Saxe. Open every day. See website for hours and additional locations www.max-poilane.fr) 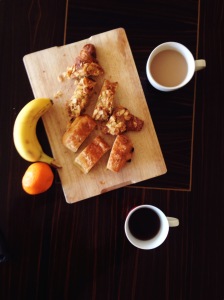 La Miche au Vieux Four    OMG. I have an awesome friend who got an almond croissant from Au Vieux Four for our work party (teaching phonetics is awesome) and it was incredible. I would have never chosen an almond croissant, but they are so good here. If you are near Saxe-Gambetta, it’s right near the metro exit and you have no excuse. They also make good bread, and they are really nice (and some of the boulangers aren’t bad looking!)

The 8th, 9th, and Villeubanne (which is basically the 10th arrondissement) are sadly missing from this list. I work in the 8th but I don’t have a favorite boulangerie (I could tell you where not to go, though!) The 9th is detached from the rest of the city – I mostly just pass through to get the bus at Gorge de Loup to go to the suburbs. Villeurbanne has some nice boulangeries, but I don’t go there often enough to have a standing favorite.

But I’m open to suggestion, so if you know of another boulangerie in Lyon that belongs on this list, please leave it in the comments! (Or you can message me through social media.) Any excuse to eat croissants.

*Please note that hours are subject to change and that businesses may be closed on national holidays and during July and/or August.

**This list is based on boulangeries in Lyon that I have personally tested and love.  Certainly, there are many other good ones in the area!

P.S. Rosie also wrote a great guide to boulangeries and patisseries in Lyon, mainly in the 6th arrondissement. Read it here.

17 thoughts on “Best Boulangeries in Lyon”