I stopped making crêpes in France. In Chicago, they were always a crowd-pleaser. They somehow seem fancy to us, even though they’re just flatter pancakes. Julia Child’s recipe was my go-to.

But in France, Julia Child isn’t remotely famous, and crêpes are a culinary staple that Frenchies all know how to make when they pop out of the womb. (Hyperbole? No.) This means that everyone has an opinion. You’ve used too much butter, or not enough. Your crêpes are too sweet. Why would you add fleur d’oranger, or rum? Hugo puts beer in his crêpe batter. (It’s very good, except for that one time we ran out of milk and added extra beer to balance out the liquid component. That just resulted in beer-flavored crêpes.)

Honestly, if I was nice enough to make you crêpes, I just want you to shut up and eat them. I don’t want to hear about how I made them wrong. I love to eat, but I’m not a gourmet cook like my dad. So I don’t make crêpes for French people anymore. They are in charge of making the crêpes.

Instead, I make pancakes. Snickerdoodles. Quesadillas. Sesame noodles. And no one gives me any crap about my cooking, which is just how I like it. Here’s what I cook to make my French friends love me more.

It’s not like no one in France has ever tasted chocolate chip cookies before. But ever since I found this salted chocolate chunk cookie recipe from Smitten Kitchen, I bring them everywhere. And people are always happy when I do.

I had to get used to making cookies without an electric mixer – I either make sure the butter is close to room temperature so that I can cream it with the sugar by hand with a spoon, or I melt it, mix it with the butter, and put it back in the fridge for a bit. You really feel like you’ve earned your cookies that way.

Brown sugar is not as readily available in France as it is in the U.S. but you can buy it at Monoprix. It’s in a blue resealable bag and it’s called “cassonade douce.” (Don’t let anyone tell you that “cassonade” is brown sugar, because it’s definitely raw sugar, not the magical cookie sugar.)

It doesn’t matter if it’s brunch o’clock or if I need something to feed unexpected tipsy guests at 11 p.m. Pancakes feel good in bellies. They just do.

I rarely made pancakes when I lived in the U.S. but now, this Martha Stewart recipe adapted on Buzzfeed is my go-to. I like the tip about using yogurt or lemon juice to substitute for buttermilk. (Who has buttermilk in their fridge anyway?)

So American, right? Cupcakes are kind of a trend in France… but many bakeries either don’t get them right, or charge an arm and a leg (or both). This chocolate cake recipe is amazing, and there’s a buttercream frosting recipe along with it. I don’t know if I would attempt the frosting without a mixer – I don’t have the upper body strength for that! It has been pointed out to me that frosting is not “très français” so now I just put a thin spread of it instead of a big swirl. 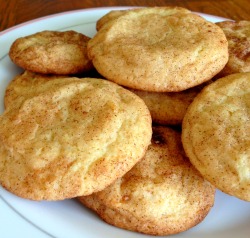 Sometimes I think I like snickerdoodles even more than I like chocolate chip cookies. You know how I like funny words. I always use this recipe. If I don’t have brown sugar on hand, I just use all white sugar. If I don’t have cream of tartar (and I never have) I just mix in some baking powder and baking soda. Nothing bad has ever happened.

Your French friends probably won’t know what quesadillas are, but their initial suspicions will be quelled when you stuff their mouths with cheesy tortilla and homemade guacamole. (They’ll call the tortillas “crêpes” or “galettes,” but nevermind.) I made these this week with Mexican rice.

I am obsessed with noodles right now. This year I found the Asian grocery stores in Lyon. (They’re in the 7th, by Guillotière.) I can buy sesame oil, rice vinegar, and a zillion kinds of soy sauce. I can’t stop making these sesame ginger noodles, and I’m working my way through some new recipes from The Woks of Life. (Although Hugo has made it clear – “beurk! dégueu!” – that he won’t eat any more hoisin sauce.) I pair the noodles with my favorite Asian cucumber salad. Sometimes I drink the leftover dressing out of the bowl. Don’t tell anyone.

I’ve only included links to recipes I love and use on a regular basis. If I have linked to your site and you are displeased, please let me know via my contact page.

I use “levure chimique,” a levening agent that is sold for super cheap in little pink sachets, for baking powder. It’s probably not exactly the same thing, but I don’t really care.

The baking soda in my kitchen is the orange Arm & Hammer kind and it came straight from the USA, but you can buy it in France – look for “bicarbonate“.

Do not accidentally set your oven to 375 Celsius. Sometimes ovens aren’t even in Celsius. They just have numbers (like, 1 to 10) on the dial and you have to guess.

Ingredients for American baking in Paris by David Lebovitz

My Pinterest, where I got all of these ideas in the first place. (I’ve divided the recipes into dessert, brunch, and everything else, because I’m compulsive like that.)

What do you cook for your French friends? Or if you’re French, what is your favorite foreign food?